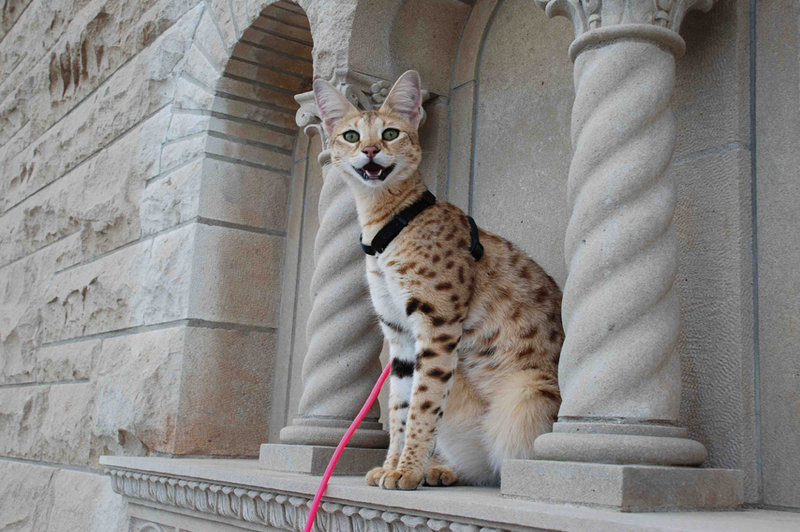 Cats are an interesting and fun breed of animal. Just as with dogs, felines have distinct personalities, specific likes and dislikes, and they come in a wide array of sizes and colors. If looking to purchase a new cat, you can choose from standard or “designer” domesticated breeds. Of course, all cats are wonderful but there is an increased interest in designer cats because they are so beautiful, sophisticated, and special.

One of the most popular choices is the Savannah cat, which resembles the African Serval although smaller in size. Savannah cats are actually very domesticated and while this particular breed is outgoing, it is also highly affectionate. However, it is the breed’s graceful appearance that makes its appearance so unique.

History of the Savannah

The first Savannah cat was born in 1986 as the result of a standard female cat being sired by an African Serval. It was quickly discovered the kitten boasted both domesticated traits from the mother but also regal traits from the father. In choosing the name Savannah for the kitten, the Savannah cat became an unofficial breed. However, it took a tremendous amount of time and effort to refine the breed and a full 26 years before TICA accepted the cat for championship status.

As mentioned, the Savannah cat looks much like the ancestral African Serval but with a much smaller body. Other obvious physical traits include the long neck, long legs, and tall, erect ears. This breed of cat also comes in a variety of colors and markings and has hooded eyes that are flat going across the top portion. Because of this, the Savannah cat has an exotic appearance not commonly seen in other standard or designer breeds.

The Savanna cat displays a number of exceptional characteristic traits but without doubt personality ranks at the top of the list. Beyond curious, somewhat assertive, and overly adventurous, there is never a dull moment when a Savannah cat is in the house. Although this breed can be self-entertaining, it is also a breed of cat that requires a lot of interaction.

Now, while this cat is not necessarily a lap animal, it does make an exceptional companion. As a loyal breed, the Savannah cat loves showing and receiving affection and typically bonds well with all members of the family. This breed is also highly intelligent and in fact, it is easily trained. Of course, not everyone will be interested in buying a designer cat but if you want something different, sweet, funny, and loyal, the Savannah cat is a great consideration.