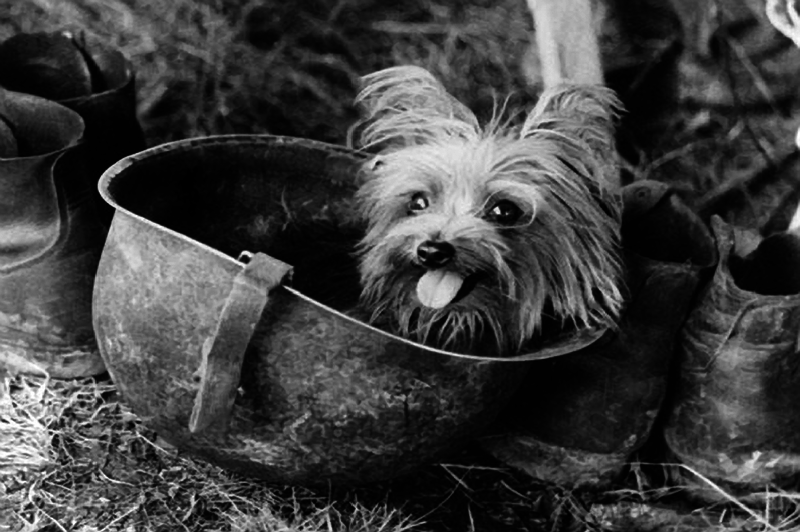 Over the past 10 years, more and more information has been provided to the public about animals and the services provided during wartime. Although horses are still used, dogs have become the unsung heroes. Not only do dogs play a number of critical roles in current wars but they actually have a long history of service in past wars as well. One such animal is a Yorkshire terrier by the name of Smoky who served an important purpose during World War II although quite different from jobs performed by large breed dogs that we commonly see today.

Born sometime in 1943, Smoky weighed just four pounds and was seven inches tall. While a tiny thing, she served in active war and worked as a therapy animal, paving the way for future dogs. Interestingly, the Yorkshire terrier was considered an obscure breed during WWII but thanks to Smoky, this forever changed.

In the early part of 1944, an American soldier found Smoky in the New Guinea jungle where she had been abandoned in a foxhole. Although the soldier initially thought she belonged to the Japanese, his opinion quickly changed when she did not respond to commands given in Japanese or English. After taking her back to camp, the dog was sold to Corporal William Wynne of Ohio for $6.44, the price needed by the seller to rejoin a game of poker.

For the following two years, Smoky and her owner went through combat fighting in the South Pacific where temperatures and living conditions were deplorable. However, this tiny terrier never complained, instead sleeping on blanket in Wynn’s tent and sharing C-rations. Even when faced with extreme adversity, Smoky remained strong and dedicated. In fact, while many war dogs experienced paw injuries from walking on coral, Smoky never once had a problem.

As part of the 5th Air Force, 26th Photo Recon Squadron, Smoky went on 12 sea and air photo and rescue missions. To keep enemy fighters at bay during those reconnaissance trips, machine guns were fired with Smoky contently strapped into the soldier’s backpack. Following are some of this dog’s specific accomplishments for which she was awarded 8 battle and 12 combat mission stars.

In addition to her dedication and bravery, Smoky mastered a number of special tricks. To boost the morale of injured soldiers in hospitals but also to entertain, this Yorkshire terrier performed with the Special Services team. While fun, her tricks actually played a key role in the building of the Lingayen Gulf airbase.

To complete construction of this critical airfield where allied war planes would land and take off, a telegraph wire had to be laid. However, there was a major challenge in that this wire had to be run through an eight-inch pipe that measured 70 feet in length. Even worse, soil had clogged approximately 50% of the pipe, thereby reducing the size to a mere four inches in diameter.

Recognizing the talent but also loyalty of Smoky, Wynne decided to tie a string to the wire and then to her collar. After being encouraged to enter the pipe, the Yorkie obeyed but then backed out. Using a more commanding voice, Wynne told Smoky to re-enter the pipe, which she did only for the line to become snagged about 10 feet in. However, this tiny dog pulled and as the string came loose, she ventured deep inside.

What seemed an eternity and with just 20 feet to go, Wynne could hear Smoky whimper. Talking to her the entire time, she soon ran full speed to the exit, emerging dirty but proud. What took minutes for this Yorkshire terrier to complete would have taken multiple men several days. The work accomplished by this four-pound Yorkshire terrier made it possible for about 250 men and a lot of equipment to keep 40 planes in operation and the area safe.

Smoky was so vital to WWII that once the war ended, the Cleveland Press featured her in a one-page story, complete with photos. Because of this, the entire country became aware of what one little dog could do. Achieving notoriety, Smoky spent the next decade traveling with her owner to Hollywood and several overseas countries where she performed her amazing tricks to include being blindfolded while walking a tightrope.

In addition to being on shows televised in Cleveland, Smoky was given her own show called “Castles in the Air” where she once again showed off her amazing abilities. However, what makes this so incredible is that during 42 shows televised live, not a single trick was repeated. In addition to television, Smoky entertained people in VA hospitals throughout the country.

This tiny Yorkshire terrier who was rescued in the South Pacific from a foxhole went on to worldwide fame but sadly in 1957 she died at the age of 14. To honor this amazing animal, Wynne carefully placed Smoky’s body in a .30 caliber ammo box from World War II, which was then buried at the Rocky River Reservation in Ohio.

In 2005, a life-size bronze sculpture of Smoky sitting inside a GI helmet was erected on top of a two-ton blue granite base on her grave site. Today, there are six memorials in the United States that honor this small but powerful dog to include:

Although Smoky performed many wartime tasks, she was ultimately named the first therapy dog on record. Her work as a therapy dog began in the summery of 1944 shortly after being discovered when she joined nurses of the 233rd Station Hospital who cared for casualties of the invasion on Biak Island.

To work as a therapy dog, permission had to be granted by Dr. Charles Mayo, who would eventually go on to found the Mayo Clinic. Because Smoky had already been featured in the Yank Magazine, it took little to convince Dr. Mayo. During the day, she would provide comfort and entertainment to injured soldiers while at night she slept with Wynne. As mentioned, Smoky continued her therapy for the next 12 years and today, has a permanent place in the history of World War II.

Click on the gallery to find out more about  Smoky and other brave soldiers (dogs) /Other resources http://www.uswardogs.org/ , http://www.war-dogs.com/